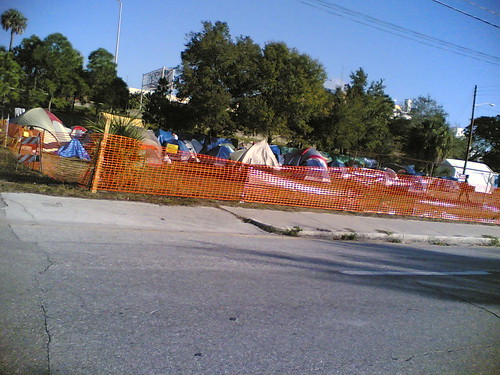 Fox News Story: “The Meanest City in the Nation?”

I urge you to watch this news story from Friday, January 17th. It describes how the St. Petersburg Police - under the authority of Mayor Rick Baker - used box cutters to destroy the tents of the homeless. This is an outrage.

St. Petersburg leaders should be leading the nation by developing partnerships between developers, hospitals, mental health agencies, private benefactors, religious institutions, universities, corporations, small businesses and neighborhood associations to coordinate create and maintain transitional housing for a population that is sure to be growing. Especially with the coming housing crisis.

Anyone who has tried to access services in this country surely understands that most facilities are full with long waiting lists, and many others have such rigid criteria that it can be nearly impossible to get help.

Has our society become so accustomed to weapons, war and torture that we’ve forgotten how to help the widow, the orphan, the downtrodden and the hurting? Are we so full of our self satiated selves that we see nothing of the pain of others? Millions of Americans are an illness away, a layoff away, an accident away from homelessness.

You can help with cash contributions and other support by contacting Bruce Wright of Refuge Ministries. 727 278 1547. And Let Mayor Baker know of your distaste for these tactics. 727 893 7171

Truth is our Weapon. Change is our Choice.
http://www.sammsimpsonforcongress.com

ok, i’m going to be the mean heartless guy here… as someone who lives only few blocks from the 3 different illegal camps they have set up over the last 6 weeks, i’m going to say, this is actually a good thing.

They had set up their tents INCHES yes INCHES from one of the busiest streets in St. Pete and had faced them towards oncoming traffic… when they got out of the tents they actually STEPPED INTO TRAFFIC.

They had been told multiple times that if they set up their tents again in violation of code that the tents would be removed. And they were. you can’t just squat on public land have the expectation that you’ll be able to live there indefinitely. They were warned days in advance and were given multiple opportunities to pack up.

They’ve been offered quite a bit of money in assistance and to get into an apartment and to get a job… they don’t want to live in indoors and go to work, they want to live on the street. As long as america is a free state, there will be people who choose to live “off the grid.”

Good luck to them. Don’t block traffic and don’t squat on public land or your property may be confiscated. Thanks mayor baker for doing the job no one else wanted to do.