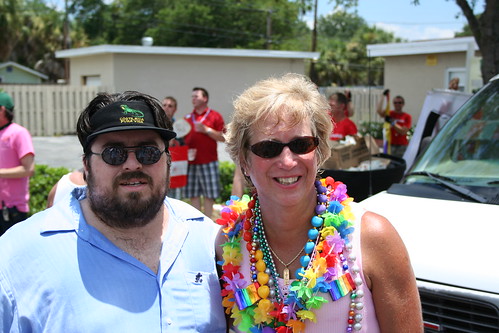 I need a new belt to take on vacation. The Big & Tall store that has the clothes that I like has 2 locations… Largo and Brandon… two areas of the city that are known for anti-gay politics. Brandon as the home of Rhonda Storms, who specifically courted the “Conservative Christian” vote in her bid for state senate by removing all recognition of Gay Pride from any agency funded by the county… and Largo, who recently fired a 16 year city administrator after discovering that he was a transitioning M2F transsexual.

So what do you do? Do you support the business in Largo or Brandon? Are business, because they did nothing, complicit in the firing of Susan Stanton?

During the last century, pastors of predominantly white churches stood by and did nothing as black church were blown up for making a stand on civil rights. Are they complicit in the bigotry? You bet your King James Version they were.

Do you go to Cracker Barrel and have the country breakfast with chicken because the deep friend chicken with gravy and biskits are simply HEEEEEEAAAAAAAAVEN even though their company policies call for firing of GLBTQ employees, which don’t get me wrong… is very, very bad. But I think I need more fried chicken before I can decide how bad it really is…. Which circles back to my need for another belt.

A few years back the Southern Baptist Convention began a boycott of Disney World because of their sponsorship of “Gay Days”. Thing was, Disney’s never “supported” gay days. I have a bunch of friends that attend non-fundy (that’s short for fundamentalist in Baptist-speak) Baptist churches and I tried to explain to them Gay Days is a bunch of GLBTQ patrons all buying tickets on the same day and attending the park. Disney doesn’t do anything for them that they wouldn’t do for any other group that does the same…. There’s a Twins day where identical twins all buy tickets. They have family reunions, Bahmitzvas and destination weddings. Some of which are support by Disney staff, but many of which are people simply choosing to attend the park on the same day. The host hotel for Gay Days, to the best of my knowledge has never been “On Property” at Disney and Gay Days has never really been a “disney sponsored” event. But the fundies never got this.

So if I go to get a belt at my favorite big-and-tall store in Largo, am I indirectly sending a message that there is no price to pay for firing susan stanton?

So in the oh-so-true words of Cheryl Crow, “it’s hard to make a stand.”