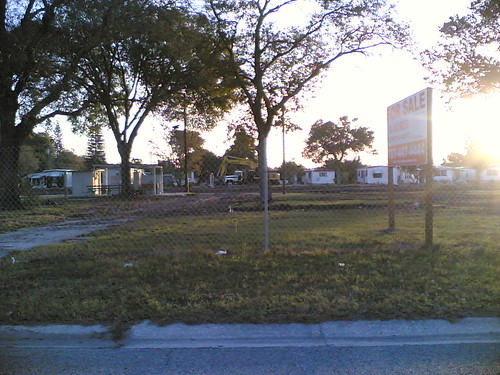 One by one they’re disappearing. Not that i’ll miss them, it’s just the end of an era. Senior Citizen trailer parks have been a pinellas county institution since my family moved here in the 70’s. Row after row of immaculately maintained lawns on which sit trailers, mostly single wide, owned by widows and widowers who lived up north and mostly worked at blue-collar jobs and retired to Florida on a pension and a six-pack of domestic beer in an aluminum can. They’re leaving us almost as quickly as they appeared. In the last 10 years the price of land in pinellas has skyrocketed and made it feasible to bulldoze them and build town-homes and other multi-family permanent structures. Through the 80’s and 90’s they deteriorated and became urban slums for the indigent elderly. Many of them rest on real estate on which it would unthinkable to put a trailer park today. On the banks of lake seminole… where a high-rise condo rents for $1500/month… Dolphin bay facing the bayside bridge… how long can you hold out? Developers will write you checks for obscene amounts of money to sell your trailer park. Multi-use high rises are,objectively, better uses for land, but part of me… that scared little boy on the bus to school in 90 degree heat.. mourns the loss of yet another pinellas icon… the 65+ trailer park.